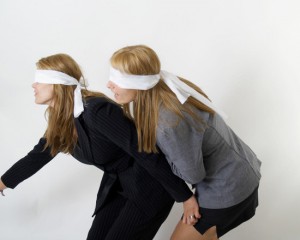 But isn’t science all about questioning? Skepticism? Re-evaluating and challenging things you thought to be true? Doesn’t all positive change require scrutiny, challenge, and exploration?

Then why are we told from one group of people that these things are best left to the experts and that we shouldn’t question what we don’t understand? Why do we so often feel the other group is saying that we should blindly accept the face value of what these really old scriptures say about how the world is made?

If you are so confident in your evolution and millions of years, why are you so afraid of some Christian coming to announce that you’re wrong? If facts are facts then their rebuke will not stand, and if your information is solid then you have nothing to fear. If you are correct in your theories then surely the so-called fairy-tale that is Christian science will die out (as you boldly predict) because it doesn’t add up.

For that matter, if you are so faithful in the fact that God created the universe and the Bible is true, then why are you so afraid of anything that opposes it? Surely the God of the universe can stand up for Himself. The fact you argue so much about it tells me you might be afraid that you’re wrong. If you are right then surely those evil, terrible, scary atheists’ theories will crumble like dried sand castles.

I’m not necessarily saying that each side should just shut up and embrace the other side’s beliefs. I’m not saying that we should all ignore each other. And I’m certainly not saying that these two belief systems are compatible. They’re not.

But no good is done in acting like little children. Healthy debate is good for growth, and a civil argument can bring urgent matters to attention. However, does it really do any good to moan, whine, and scream about how correct your point of view is? Being stubborn and immovable will only make you like the Zax as described by Dr. Seuss.

Stalwart Christians are not going to be shaken in their faith by getting into a petty argument with an atheist. If they are, then maybe they were not stalwart Christians. Likewise, argumentative apologetics will never lead anyone to Christ.

Whoever you’re arguing with has already made up their mind.

If you don’t take anything else away from this, then take this: you should always be willing to question yourself and your beliefs. You should always be willing to change if you find fault with yourself. (Or if God finds fault with you!) And you had better understand why you believe what you believe. Otherwise, I don’t care who you are, you are sitting on an unstable foundation and your character can collapse in on itself.

Have some original thought. Have some integrity. Have enough respect for yourself to believe that you can actually be smart enough to understand your own ideals.

If you subscribe to atheistic science and modern humanism for the sake of progress, you had best understand the history behind your beliefs and the building blocks of your worldview. If you are a Christian, then God has already given you answers to a large number of life’s burning questions. Do you know them?

2 thoughts on “Never Question Anything. Ever.”