*Author’s Note: this is an edited re-post from my old blog. I originally wrote it in August of 2014*

If you haven’t heard of him, Matt Walsh (blogger) is sort of an internet anti-celebrity who works for the Blaze blogging about really controversial things and upsets a lot of people. In a nutshell.

Anyway, the point is that he’s a Christian blogger whom I highly respect. I enjoy his writing and I agree with his arguments. And so I sent him an email.

Something Matt occasionally does is respond to emails from readers. Usually he’s logically defending his stance from someone who is irrationally screaming at him, calling him names, and generally being really nasty while blaming him for hatred.

Let me warn you: this is not the kind of story that will blow you away and change your outlook on some major topic. This is kind of like when you’re driving home and see a homeless guy on the highway, have some really spiritual thought about why Christians don’t help homeless people, and then go home and tell someone your paltry experience as a story. All without helping the homeless guy.

As I state in the email, I had been dealing with a profound fear that was stirring and simmering over the prior months. Who knows, some of the things Mr. Walsh posts about might have contributed to this fear. Other things I heard on the radio. Some things I saw on local news outlets. Social media. More than anything, though, I see first-hand where the world is and where it is going. And it freaks me out.

What’s really interesting is that, apparently, Matt had been dealing with similar feelings. In his Facebook post of the blog entry:

“It was just very strange, because it was an email that, out of nowhere, describes exactly what I’ve been going through in my head.”

Very strange indeed, Matt. Even stranger is that, as I was thinking about sending him that email and before I had even written it, I thought “I bet he will respond to this.” And it’s not that I was just trying to get him to do so for the sake of seeing my own email on his site. I legitimately wanted to share this with him and hopefully see him write about his thoughts on it.

Even more strange: as I scrolled my mouse to click on the send button I suddenly got this really strong feeling. I felt sure that he WOULD write about it. I thought “is this the Holy Spirit or did I eat too much processed food today?” Maybe it was both, but I dismissed the feeling as hopeful superstition and went on with my day. 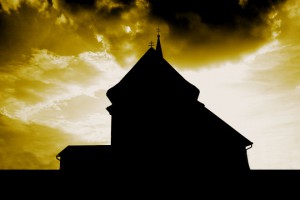 The next day (or a couple of days later, I don’t remember) I was about to go to bed and mindlessly scrolling down my Facebook newsfeed one last time before going to sleep. “Oh, cool, Matt Walsh wrote a new post today.” I was going to read his Facebook blurb, read his blog post, and then go to bed. Then I read my initials: “TB.” What?

My heart jumped.  He just happened to be dealing with the same thing as he was scrolling through his email inbox. Very interesting. As I read through his response to my letter, I knew that God had a part in this for sure. And since he had been thinking similar thoughts, it was probably some therapy for him as well. And I thought that was pretty cool.

And then I read through the comments. Hundreds of other people had commented saying how they felt the same way, how they were discouraged and scared too. Hundreds of other people wondered if there was hope, if there were allies out there, if they could trust God to hold their future. I guess they were all too scared to say it until some mildly famous internet sensation blogged about it.

These people were encouraged. Not necessarily because of what Matt wrote, although many including myself were touched by his words. But they were encouraged just by knowing there were other people out there who had similar feelings. People were comforted just to know they have friends they haven’t met with similar struggles. And to think I had a small part in this was quite humbling and surreal.

My fear isn’t gone (and might never be), but I feel comforted. I’m not “scared to death” anymore. Not really because of what Matt said, he himself confessed he had no particularly sage advice to give. Not because he responded at all.

And not because hundreds of people sympathized with my feelings. But because God played out this small event in part to show me that He is always there watching, ready to do his God thing, even when I am in fear. And that is comforting.

It was one of many answers to groaning prayers I had which came out of a feeling of isolation in the Christian world. Over the course of a year I was taught that the church is real, relatively hidden, and ready to support one another.

The best part is that God was glorified. A guy who was “scared to death” emailed another guy who was scared, and the other guy happened to have a popular blog. And so the guy with the popular blog blogged about being scared and hundreds of other scared people felt better and worshiped the Lord. Woo!

I know this is a really minor event and most people don’t really care. But it was a big deal to me, and it really blessed me. God speaks in a still, small voice and it is often in really minor details that He shows Himself.

So thank you, Matt Walsh, for giving your heartwarming answer to my email. It really did touch my heart in a wonderful way. And thanks to the community around his blog for coming together and comforting one another. Thanks to anyone who read this post which will probably total about 18 people.

And most of all, thanks be to God, who has shown my fickle mind once again that He is always watchful and aware of my situations, and that he is trustworthy. Amen.

Thanks for reading. Did you enjoy hearing my side of this story? Are you a Matt Walsh reader?

I want to hear from you in the comments below!