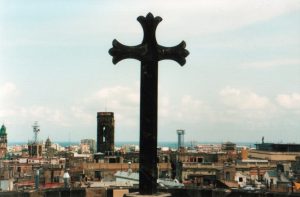 I would suspect that most people know the general answers (the story of Jesus on the cross) but what about some of the more specific reasons as to why the cross became a worldwide religious and cultural icon?

Crosses have been symbolic and decorative icons for nearly 2,000 years. There is a lot of history to cover! But here I’m going to give a basic overview and explain why the cross is a symbol of Christianity.

What Is the cross?

This is the part that I think almost everyone knows, but maybe I’m wrong. If you don’t, then I’m glad you’re here!

Jesus of Nazareth, whom Christians believe to be God Incarnate and the Holy Messiah of the Hebrew God Yahweh, was beaten and flogged prior to being nailed to a wooden cross and left to die.

This is called crucifixion and to this day is considered to be one of the most brutal and painful forms of capital punishment throughout history.

Though the story of Jesus and the Cross happened about 2,000 years ago, it still impacts our culture today. But why has the world clung to the cross, and why is the cross a symbol of Christianity?

Why the cross? A Symbol of Death and Torture? 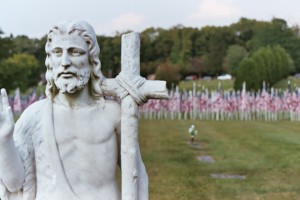 The Cross is one of the reasons why some who are ignorant of basic Christian doctrine think Christianity is a death cult.

Why glorify an instrument of torture and execution in a religion that is supposedly all about new life, forgiveness, and redemption?

Redemption indeed. Christians do not celebrate crosses in general or what crosses stood for during the height of the Roman empire. Christians celebrate the cross of Christ in particular because of what Jesus did there.

Before Jesus came, the Israelites were commanded by God to give sacrifices because of their sin. A LOT of sacrifices. Enough that in some ancient temples there were irrigated runways just to help wash the blood away. And not just any sacrifices – the best, healthiest, fattest, most beautiful livestock were the ones to be offered

And here is a kicker – these sacrifices had no power and did nothing in and of themselves to forgive or save from the consequences of sin. Only God is able to purify us from sin. The purpose of the sacrifices was twofold: first to keep the Israelites aware of their sin, and second to remind them to be devoted to God who redeemed them.

Jesus’ death on the cross was the ultimate sacrifice: the sin of mankind bore by the only perfect and sinless man to walk the earth. God incarnate, Son of the Father, came to pay the sin-debt of all humanity so that the gap between us and Him would be closed thus allowing us to have direct relationship with our Lord and Creator.

The picture of sacrificial slaughter was now complete: Jesus willingly slain for our redemption out of love for us so that God may be glorified. Jesus transformed the wretched and tormenting symbol of the Cross into a symbol of redemption, forgiveness, and sacrificial love. Jesus turned the horrible cross into a picture of life, truth, and freedom.

And it didn’t end there. Three days after His death Jesus was resurrected and appeared to his family, His disciples, and over 500 others.

Jesus then gave the great commission to His followers and ascended into heaven to be at the right hand of God the Father. And thus the cross went on to signify resurrection, God being with us, and the gospel of Jesus as a whole.

Many people find comfort in the cross as a representation of Jesus and His love for us. It serves as a reminder for the ultimate sacrifice and to keep eternity in mind.

Although the cross has grown to represent a great number of things including humanitarianism and and general goodwill, its popularity is rooted in God’s free gift of eternal life with Him to all of us through His son Jesus.

Yes, it existed before that as a symbol of terror, tyranny, and torture. But Jesus took all of that and made it into a beautiful story of self-sacrifice, salvation, and glorification of God.

Related: Why are Christians so Stupid? Find the answer here

Do you have other questions about the symbolism of the cross?

And please do let me know if my explanation helped you!

2 thoughts on “Why is the Cross a Symbol of Christianity?”