It’s the time of year again we start to see those familiar articles popping up: is Halloween evil? Can Christians participate in Halloween? Meanwhile here I am googling Christian Halloween costumes for adults.

Of course, I’m going to write one of those articles myself. But for now just let me have my fun. I already looked up some Biblical Halloween costumes for kids, and now it’s time to help out the adults.

So whether you’re taking your kids to a trunk-or-treat and don’t want to feel left out or you’ve got your own grown-up Halloween party to attend, I’m going to try and help you find the least crappy Christian costumes available.

No guarantees on a total lack of crappiness, though. If you want a really well made and historically accurate costume, you’ll have to make one yourself or consult with a theater clothier.

Keep in mind I’m doing this for fun and with humor, so don’t be taken aback by any snide comments I might have. It’s doing me some good to write a couple of lighthearted holiday articles this month. 🙂

For your convenience I’ll be using the familiar Amazon catalogue to find these costumes, and I’ll only be picking costumes with the highest amount of good reviews I can find. Let’s get started!

Okay, so this costume (pictured above) isn’t as much “Biblical king” as it is “ambiguous historical figure of royalty.” But hey, it’ll work for your Fall Fellowship Festival, so who cares?

This king’s costume doesn’t even necessarily have to be for men. Order a smaller size then ditch the crown and beard then BOOM! You’ve got a general unisex royalty costume.

But didn’t historical, royal dress differ widely between time periods and genders? Shh… it’s a Halloween costume, we’re not making a movie here. Although if we were, you could probably still play in something like this Ruth movie.

Judging quality by product image and good reviews,  here is the best Biblical king outfit I could find. 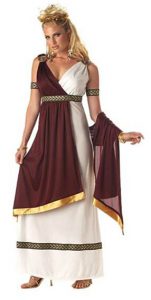 When looking for these costumes I realized that not only Christian Halloween costumes for adults are difficult to find, but specifically for women. You can be an angel, the virgin Mary, or a nun, and that’s about it.

Unless you think outside the box. For the most part the New Testament was written while the first Christians were under the thumb of Roman rule. As Christianity spread, even Romans began converting. Families of royalty and wealth were no exception.

This obviously isn’t a commoner or peasant costume, but it’s not necessarily royalty either. It could also be used for a toga party, but that’s neither here nor there.

Either way, it does fit the Biblical narrative (in an indirect way) and although you typically wouldn’t think “hey look, a Christian costume,” it still works.

There is a popular and highly rated roman woman costume here, and there is a separate entry for plus sizes.

You might not think a costume of a Roman Catholic cardinal is necessarily “Christian” either, especially if you’re a protestant like myself. But Cardinals and similar religious authority figures undeniably played a large role in the history of the church.

Aside from it being relevant in culture and history, it also looks pretty cool! And if you’re a fan of the Cardinals football team, it’s a great joke costume. 😉

You can find the highest reviewed Cardinal outfit here, although there are several styles to choose from. Get a decent one and you can recycle it for use in a renaissance/medieval faire.

Although they may not be in the Bible, the fact is that monks and nuns are significant historical and cultural icons. They have a pretty big place in Christian history and are highly recognizable, which is what makes them good costumes.

First thought might suggest these are overused cliche costumes, but I personally don’t think I’ve ever actually seen anyone dress up as these. Then again, I don’t regularly frequent costume parties and cosplay conventions. 😉

The top entry on Amazon for “monk costume,” wasn’t my first choice, it was this monk’s outfit. The first entry for Nun seemed to be the best, though.

Okay, I said I was having fun. Now it’s really time. Whether you’ve been a Christian for any amount of time or not, you’ve likely run into some overzealous mountaintop-dwellers who are so “on fire” for Jesus that you can smell the charcoal from a mile away.

Obviously it’s good to be really passionate about Christ. But there is a problem when you’re so gung-ho for missions that you waste time trying to evangelize people who are already solid in their faith. No, I don’t need a Bible tract when I’m already reading the Bible on a regular basis.

Anyway, nothing is sure to strike horror into the hearts of your peers the way a large-print red-letter Bible and a gaudy cross necklace is. You’re also going to need a corny yet relevant T-shirt from your local Christian bookstore. Keep those pants conservative, though. We can’t have faded, holey jeans unless we’re witnessing to the rowdy crowd.

A matching hat will work as well (just don’t wear it indoors or during prayer). And don’t forget the I am Second wristband or at least one with WWJD on it. Temporary tattoos are optional, just make sure you can hide one if you take that route.

Of course this is a joke, but I’m not kidding about it being a good Halloween costume. Seriously, give it a try. See how obviously Christian you can make it look. And see how long it takes for people to guess what you are dressed as. 😉

That’s all I’ve got for you today, folks. I tried to find some decent Christian Halloween costumes for adults, and I’m afraid decent was all we got. Unless you’re making your own Cosplay or having one custom made, I’m afraid there aren’t a lot of options.

That being said, most Halloween costumes are only worn once and these are good enough for that. And hey, we’re just having fun anyway, right?

If you liked my list or if you have better suggestions, comment below and let me hear about it. And with that… Happy Halloween!